The term ‘Spey estuary’ is used here to include all tidal areas at the mouth of the River Spey, and adjacent habitats.  Part of the estuary consists of a number of shingle islands dissected by the river, whose course regularly changes. It discharges into the sea at Tugnet. On the west side of the river mouth, at Kingston, are tidal lagoons and a muddy estuary with a small area of saltmarsh and a reed bed. Also included within the ‘Spey estuary’ recording area are the shingle beaches within c500m of the river mouth and birds within identifiable distance on the open sea.

As might be expected, the birdlife that can be seen in the area depends largely on the season, the state of the tide and the prevailing weather conditions.

Winter is a relatively quiet time with the birdlife of the area dominated by wildfowl. Flocks of Mallard, Wigeon and Teal frequent the marshes while Goldeneye dive in the river channel with a few Red-breasted Mergansers and the occasional Goosander. Offshore, Eiders, Long-tailed Ducks, scoters and divers may be seen. The first Shelduck usually return in February. A small flock of Greylag Geese often winters around the estuary. Waders are scarce, with Oystercatcher, Curlew, Redshank and Turnstone the only likely species. Snipe may be flushed from the saltmarsh. The gull flock is dominated by Herring, Great Black-backed and Common Gulls – but it is always worth checking as Glaucous and Iceland are found in most winters.

Spring begins early at the Spey estuary with most wildfowl flocks declining during March and local breeding species moving in. Red-breasted Mergansers become more numerous in late April, prior, presumably, to moving upstream to breed. Goosanders also first appear in significant numbers. The Curlew flock breaks up and the first Ringed Plovers and Dunlin often appear in early March. Common Sandpipers flit along the river margins from mid April. The first terns are likely in early April, usually Sandwich are the first to be heard passing offshore, with Common and Arctic arriving at the Spey estuary in mid month. Sand Martins can be expected over the river any day from the end of March with Swallows inspecting the Tugnet buildings from mid April. Around this time the first Ospreys will have returned from Africa and can be seen fishing along the lower stretches of the river or in shallow water just offshore. The riparian woodland comes alive with bird song – firstly the resident species and then these are joined by summer visitors such as Willow Warblers in mid April. Sedge Warblers start to sing in the rank vegetation at Tugnet and Whitethroats in the drier scrub.

By mid May, Goldeneye and Red-breasted Mergansers will have left and Goosander numbers rise further. Spring wader passage is at its peak and numbers of Dunlin and Ringed Plover may briefly exceed 50. Scarcer species such as Whimbrel, Wood Sandpiper and Temminck’s Stint should be looked for at this time. A marked passage of White Wagtails is often evident.

In mid summer, Common and Arctic Terns fly up and down the river to their breeding colony on the shingle near the viaduct and during July large numbers are often resting on the shingle around the river mouth. Juvenile Great Black-backed Gulls dominate the gull flock – sometimes 200-300 with at least as many Herring Gulls. Common Sandpiper numbers rise rapidly in early July as birds move down from upland breeding sites, and Dunlin passage peaks between mid July and mid August, when a few hundred are occasionally counted. Ringed Plovers pass through in variable numbers during August and this is the time when the distinctive call of Whimbrel can often be heard. During August and September a range of less common waders is likely to pass through, such as Greenshank, Black-tailed Godwit, Little Stint, Curlew Sandpiper and Ruff. The flock of Curlews increases to several hundred at this time and the flock of moulting female Goosanders around the river mouth is at its largest.

By September the peak passage period for waders is past, although Little Stint and Curlew Sandpiper may still appear. White Wagtails join the Pied Wagtails on the open mud, and Teal and Wigeon numbers start to rise once more. In mid month the first flocks of Pink-footed Geese pass over. Offshore there may be large numbers of fishing or passing Gannets, and Cormorants rest on the shingle spit when not fishing. The gull flock contains hundreds of Common Gulls in addition to the Herring Gulls. More adult Great Black-backed Gulls arrive and the terns leave – Common and Arctic by early September although a few Sandwich are likely until late in the month. The last Osprey is usually seen in mid month.

During October and November the bird life of the Spey estuary returns to winter levels. The Goosander flock disperses but Goldeneye replace them on the river. Snipe become more numerous on the marsh but apart from Curlews, few waders are present. If weather conditions are right, flocks of Redwings and Fieldfares may arrive off the sea. The stubble fields around Tugnet may contain flocks of Linnet, Yellowhammer  and Skylark. There will be a few Reed and Corn Buntings and, with luck, a Snow Bunting or two on the shingle. 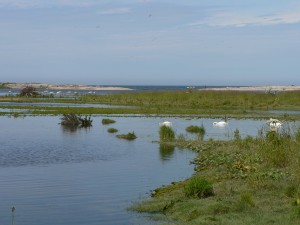