Welcome to Birds in Moray and Nairn.

This is the place to find out everything to do with birds and birding in Moray and Nairn.

The district of Moray and Nairn stretches along the southern shore of the Moray Firth from Cullen in the east to Nairn in the west.
The area then extends southwards in a broad triangle with its apex in the Cairngorms mountains. Nearly half of the land exceeds 250 m altitude and is therefore upland in nature.

There are extensive woodlands largely composed of conifer plantations. In many areas however these are sufficiently mature to have been colonised by Crested Tits, Siskins and crossbills. Capercaillies persist in very small numbers. The birchwoods of the upland glens ring with the song of Willow Warblers and Tree Pipits in spring; Redstarts and Spotted Flycatchers also breed. Two wonderful rivers, the Spey and the Findhorn, lend much to the character of the area and many smaller rivers and streams drain the interior into the Moray Firth. Typical breeding species are Dipper, Grey Wagtail and Common Sandpiper. Goosanders inhabit the smaller upland tributaries with a few Red-breasted Mergansers breeding on the lower reaches.

Short stretches of cliff run from Hopeman to Covesea and from Portknockie to Findochty. Here may be found good populations of Fulmars and Kittiwakes with a smaller number of Shags, Razorbills and Black Guillemots. The best rocky shores are between Burghead and Hopeman, at Lossiemouth and between Portgordon and Findochty.

Winter waders, which include Purple Sandpipers, are often well accustomed to people and easily watched.

There are three muddy estuaries, the wide expanse of Findhorn Bay and the smaller, but more intimate and easily watched, estuaries of the Lossie and Spey rivers. A wide variety of wildfowl, gulls and terns feed and roost on the estuaries and fishing ospreys are a regular feature in summer.

Offshore, Burghead Bay and Spey Bay are well known for their flocks of wintering sea ducks including Common and Velvet Scoters, Long-tailed Ducks and Eider. 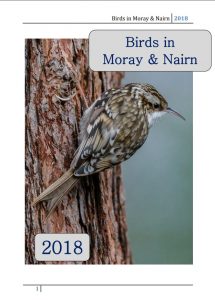 BIRDS IN MORAY & NAIRN 2018  is now published and can be found under ‘Bird Reports’ – ‘2011 onwards’, or on the link below. The report is only available on this website, from which it may be printed if desired.